Baahubali 2: The Conclusion sets the mood by opening with 3D reconstructions of iconic moments from the first film: Bhallaladeva tackling the bull head-on, Baahubali suspended in mid-air as he aims his arrow at the tree perched atop the mountain he has forever wanted to conquer, Kattappa kneeling under Baahubali… It’s a beautiful, sophisticated way of familiarising you with the events of the first, and it’s impossible not to shout yourself hoarse in response to the now-pop culture frames.  There’s a reason why. The film’s characters are mythical, and in a sense, archetypes. The power-hungry villain. His conniving father. The loyal servant. There’s a reason why you don’t remember a single good deed done by Bhallaladeva. They are all simple, and fiercely, effectively, simple. Sure, you could argue that real people aren’t like that, but Rajamouli isn’t interested in reality. He’s aspiring for something more primal, more visceral. He’s tapping into myth, and with such charismatic characters, you have to say he’s got it right.

Part 2 begins as Kattappa continues his narration of the events that led to him plunging the sword into Amarendra Baahubali. And sure as it is with many a mythical tale, it’s a woman of great beauty who is at the heart of the conflict: in this case, the fiery Devasena, the Kuntala princess. Swathes of the first half are devoted to the comedy-romance track involving Baahubali, Kattappa and Devasena. It may be an idea steeped in masala cinema, but it’s lavish in every way. Baahubali is shown talking to Devasena, but there’s a majestic ice-cap in the background adding flavour to the scene.

Rajamouli is a masala filmmaker of the highest calibre. Time and again, he makes you wait for the moments of heroism—for the crests—and even though you know they are coming at you, you can’t help but be blown away when they do. Baahubali is in disguise as a simpleton, and you instantly recognise that it is all set-up for a big reveal. They go on a wild boar hunt, but no, says Rajamouli, it’s too small. A raging bull comes at him (much as it does at Bhallaladeva in his introduction scene), but no, says Rajamouli; the reveal isn’t befitting a hero of his stature. And then in the biggest of the battles, in the most overwhelming of situations, the veil is lifted, and Baahubali’s valour, his machismo, is there for the world to savour and admire. He is the fire among the ice, the dynamism among the sedate. The slo-mo sequences and Keeravani’s grand background score add to the effect. 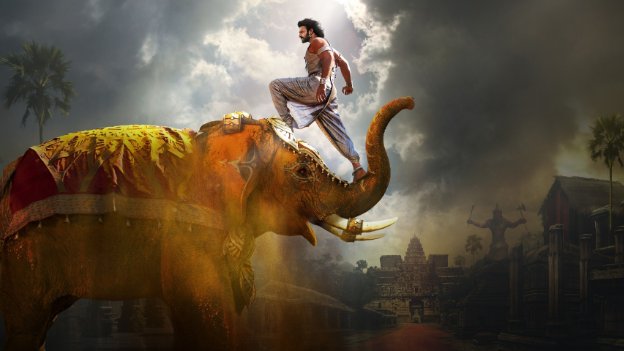 As is the hallmark of a tasteful writer, Rajamouli makes sure that no references, big or small, are left unused. The bull that comes charging at Baahubali, for instance, serves the purpose of acclimatising you for a battle sequence when a group of them come in handy. There are some splendid touches throughout the film that foreshadow later sequences. Sivagami tells Baahubali that god gets taken on a procession through the streets only so he can firsthand witness the suffering of the people. And sure as grandeur in a Rajamouli film, Baahubali later gets sent to live among the people of Mahishmathi. He isn’t just a mass hero; he is god incarnate. In another instance, Sivagami orders for Devasena to be brought to Mahishmathi in chains. Baahubali captures her all right, but in love, not in chains. Later, Bijjaladeva, the father of Bhallaladeva, compares his devious plan to a yaagam. He spits the plan at his hapless, manipulated victim and compares him to a viragu (twig). You instantly see this idea reflected in the chief pursuit of Devasena’s life, as she spends her years of imprisonment collecting twigs. It all comes together so organically, so beautifully.

Oh, and there are so many portions that make the first film so much better. Baahubali (which roughly translates to ‘the man of strong arms’) gets a fitting introduction scene in this film, as he tugs forward a chariot to tame a wild elephant. But of course, this is likely the same elephant that sheds a tear and raises its legs in acknowledgement in the first film, when the first cries of Baahubali tear through Mahishmathi’s air. The imposing Bhallaladeva statue also gets an important scene in this film. Even the linga from the first film finds a mention with an end that put a smile on my face. Rajamouli’s universe in a sense is unabashedly religious.

And what of the grandeur, the sheer scale of Mahishmathi in this film! The big coronation scene, for instance, leaves you gasping at the interval. It’s a mark of the efficacy of the sequel that this review hasn’t even addressed the big Kattappa-killing-Baahubali question yet. I wasn’t mind-blown by the answer, but it’s affecting enough on an emotional level. To be fair though, I doubt any answer could have been staggering, considering the hype involved.

Baahubali 2: The Conclusion is deserving of high praise if only for the visceral experience it is. By no means though is it a perfect film. Some of the lip-syncing in the Tamil version is awful. You hear “Azhaithu vaarungal”, but you see the mouth say, “Theesko randi.” You hear “Naan”, but see the mouth say, “Nenu.” I can only wonder how much worse it likely is in Hindi. Other missteps include the over-long comic-romantic track concerning Baahubali in Kuntala, and perhaps the inclusion of a song too many. The biggest misstep, however, is likely a stunt idea gone awry at the end. Let’s just say it’s too big a leap of faith… pun intended.

The film ends with a conversation teasing a potential continuation of the story, with a character saying, “Sivanukku dhaan theriyum.” Perhaps Rajamouli was referring to the producer. Perhaps he was referring to himself. But if it were indeed to happen, I think it’s safe to say that we will be in for one hell of a ride, all the hype notwithstanding.

This review was written for The New Indian Express. All copyrights belong to the organisation. Do link to this page if you’d like to share this review.