AFTER all the praise that has come his way for his performance in Bogan, you’d expect Arvind Swami to be bursting with joy. As he leans back with a cigarette at his Besant Nagar mansion, he denies he’s elated. “It’s relief. It’s the pressure slowly deflating,” he says. Excerpts from my conversation with the sophisticated actor…

For much of the 1990s, you were thought to be the posterboy of attractive men. After about two decades, it seems to be happening again.
I think little of it. I don’t internalise any appreciation directed towards my looks. Even during the ’90s, if you remember, I did a deglamourised role in Devaraagam, a year after I did Bombay. In fact, I did a variety of roles, only so people could focus on my acting instead.

That’s happening too. Perhaps it has something to do with you doing negative roles?
My doing back-to-back negative roles was definitely not planned. I did Thani Oruvan as I wanted to avoid the stereotypes associated with negative roles: drinking, smoking, loud dialogues, etc. I met Lakshman (director of Bogan) at the success meet of Thani Oruvan. I liked the core idea of Bogan — the body swap.

Surely, you must have been reminded of Face/Off?
The idea of a man’s soul occupying another person’s body has long been explored in Tamil cinema. Only, we call it ‘koodu vittu, koodu paayardhu’. I don’t know, perhaps Lakshman was influenced by Face/Off. But as an actor, I liked it as it allowed me to play two contrasting roles. Furthermore, Lakshman was very collaborative. And that’s important for me—that a director listens to my ideas, and has a dialogue with me.

If you look at this long enough, Hopkins will inhabit your body

If that S and M joke in the interval block was any indication, I’m guessing your ideas were definitely well-received.
(Laughs) That was my idea, yes. I thought of the joke as we were getting ready for a scene. I was in handcuffs, and the line just came to me. If some sections of the audience don’t get it, I’m not going to try and teach them about it, you know. It was just my being loyal to the character’s motivations.

Also, considering I’m now 46 years old and about 25-years-old in the film industry, I am going to make my voice heard. I only work with people who are willing to collaborate. If you don’t like my ideas, talk to me. Explain why you don’t. When I accept a film, I thoroughly embrace the character I play. I’m constantly thinking about him. Sometimes, I wake up suddenly at midnight, and message the director to ask if he’s awake.

Perhaps it’s that sort of investment that has finally brought a character our cinema has long been bereft of — the sophisticated villain.

I don’t even see Bogan as a villain. The film’s called Bogan, and I am Bogan. How am I the villain? If you made a film about Magneto, you wouldn’t think of him as the villain, right? I’ll never think of my role as being lesser than another actor’s. It’s important for me to get immersed in his world view. Perhaps he is ambitious like Siddharth Abhimanyu (Thani Oruvan), perhaps he’s a ruthless opportunist (Aditya in Bogan)… I’m more interested in the events that shaped him.

You seem liberated, playing these characters.
I am. I’ve signed up some positive roles too, but I don’t feel the same freedom of portrayal. Negative roles come with so much scope — there are moments of vulnerability, heroism, pure evil, eccentricity… 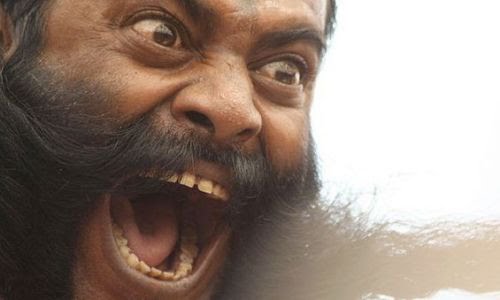 An example of sophisticated villains in Tamil cinema before Thani Oruvan

Jayam Ravi and you have now become a sought-after duo.

Well, too bad that my dates are all taken for the year. But I’d be happy to work with him if another terrific script comes our way. I like that we can bounce ideas off each other. Many scenes in Bogan were the result of collaborative effort. There’s a scene after we swap bodies, when I’m restrained in a prison, and he comes to taunt me. I was helping him with the negative character’s body language. I told him to go for the kill, that it was his scene. I also made sure I was on the location during the initial days, to make sure that Vikram’s body language was perfect, after the swap occurs.

It was my responsibility as an actor who’d invested time and effort into understanding Aditya’s character.

You also did a bit of a dance in the ‘Kooduvittu Koodu’ song.
(Laughs) I think I must have last danced for a film in Bombay for ‘Kuchi Kuchi Rakkamma’, more than 20 years ago. I used to dance when I was in school (Don Bosco Matriculation School). Somehow, it died out.

Dancing is an expression and you have to feel it. When Prabhu Deva (producer of Bogan) suggested that I dance, I asked, “Indha vibareedha vilayattu ungalukku thevayaa? (Do you want to embark on this dangerous game?)” But Bogan is a party animal, and the song is about his philosophy of life. So, I had no problem, as the dance was within the framework of the character.

Tell me about your process of arriving at this framework.
Once I take up a role, I’m letting it form in my head. I exhaust myself thinking about the character. I’m subconsciously ruminating over his motivations, desires, fears… When I read a scene, I ask myself if the character would behave like that. When I read dialogues, I’m asking if the character will speak like that. I suggest ideas when I’m not convinced.

That’s why I have butterflies before a film’s release. A film’s success or failure isn’t in my hands, but I want to see if my suggestions were right. When the reactions are overwhelmingly positive as they are to Bogan, I’m relieved. I’m not overjoyed, I’m in no mood to party. I’m just so fatigued by all the pressure that I just want to sleep for two full days.

In one of our earlier conversations, you had mentioned that you burn out easily. Are you in danger of that now?

No, and that’s because I am on a creative high at the moment. We’ve shot half of Sadhurangavettai 2 already. It’s a fun film, and a smart script. I’ve signed up a cop film with director Selva, called Vanangamudi. I’ve signed another exciting project I can’t talk about yet.

Where does this sudden surge of productivity come from?
My kids are grown up, and I don’t have to be with them physically. Did you know that for almost ten years, I didn’t travel even for one night, so I wouldn’t be away for them? I was a hands-on parent. Now, however, I have time, and I can channelise my creativity. I’m writing scripts. I’m singing songs. I’m dancing. I’m acting. All the appreciation coming my way is also fuelling this high.

I noticed that you painstakingly respond to each appreciative tweet.
It’s only fair, considering people take the effort to reach out to me. One person said that I respond only to those who appreciate me. I responded saying that even if he didn’t like my film, I’d thank him for watching it, and try to deliver a better film next time. I’m enjoying cinema as I never did during my 20s.

What has changed?
I was a bit of a recluse in my 20s. I didn’t want to be a star. I was under-prepared to be one. Even when films like Roja and Bombay made me popular across the country, I went to the sets only to learn from people like Mani Ratnam how films were being made. I was more curious about that. I didn’t care for the celebrity status. Today, I’m relaxed and more self-assured. Audiences are also more appreciative of innovative work. I wish scripts like Soodhu Kavvum were written in the ’90s. As I see it, I’m 46, and I’ve got another three-four years of prime time. I want to pack these years with as much quality work as possible. I’m doing what I like, and the audience seems to be liking it too. It has never been better.

This interview was written for The New Indian Express.  All copyrights belong to the organisation. Do link to this page if you’d like to share it.