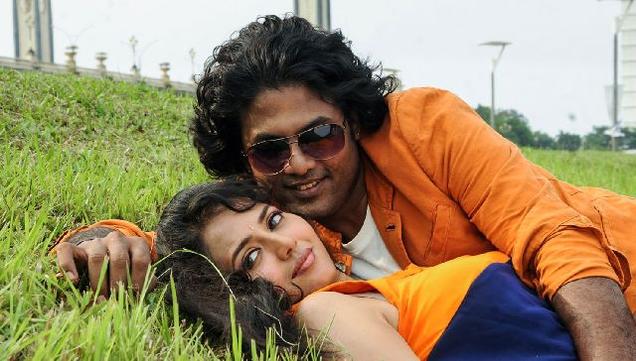 Sometimes, there are films so bad that every second spent watching it seems like an excruciatingly long time. The theatre begins to seem like a prison from which you’re scared you’ll never manage to get out. Even if you make it out, you know that the experience has affected you in a deep way that cannot ever be undone. Adhibar is that traumatic to sit through.

It is perhaps the most bizarre film I’ve seen in a long time. So, you have Shiva (probably the most overused male protagonist name in Tamil cinema during the last two decades), played by Jeevan. He’s living in Canada until he gets a dressing down from his mother for getting into a fist-fight with some sleazy Canadians. One of the things his mother tells him is that he ought not to get himself in trouble in a foreign land. For some reason, this rebuke rankles Shiva, who wakes up the following morning and decides to start a real estate company (???) in India. People reach odd conclusions all the time in this film. Some of them even change motivations abruptly. For instance, a rowdy (Nandha) becomes reformed for no real reason. When this rowdy asks Shiva for a job at his property firm, he gets it because the latter apparently trusts him. You don’t get to ask why. The film says so. It doesn’t matter that they were fighting at a shady bar only the previous evening. The said bar incidentally is named ‘Cards Bar’, for it’s the abode of evil men who, you know, drink and gamble.

The film is mainly about the obstacles Shiva encounters while he’s making his name as a developer and driving his Audi. His problems include bribed CBI officers and a foe who masquerades as an ally. It’s a harrowing story… for the viewer to sit through.

One of the main characters is Eswaran, the lawyer of Shiva, played by veteran Tamil actor Rajeev with a ridiculously fake beard. I couldn’t watch even one scene without wondering why the other characters weren’t trying to yank it off his face. Along with Nandha, you also have actor Richard in a pointless role. Thambi Ramaiah and Kovai Sarala try to provide the laughs but fail. There isn’t a singular moment of respite from the relentless barrage of bizarre scenes that is this film. Somewhere in between, Thambi Ramaiah, who addresses his young son respectfully by suffixing every line he says to him with ‘– nga ’, tries to randomly preach about the importance of parents being respectful to their children. After some time, it really begins to feel like you’re trapped in a nightmare that makes no sense.

There’s also a blatant product placement of the film’s producer towards the end. As you’re walking out, you dimly realise that somewhere during the beginning of the film, the director announced that the film is based on a true story. I know they say life is stranger than fiction, but surely, even life couldn’t hold up to the ludicrousness of Adhibar?