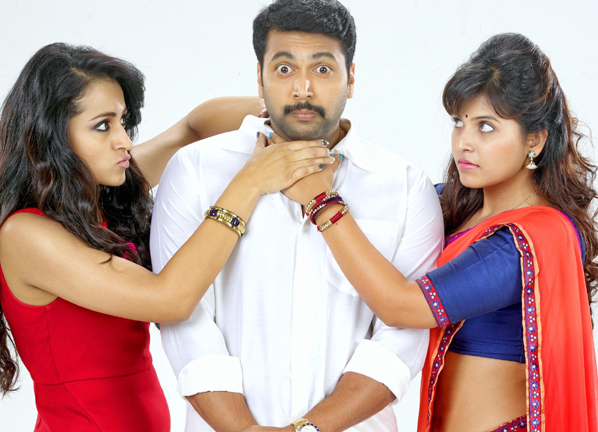 Dheena. Thalapathi. Vaali. Padithal Mattum Podhuma. Thirupaachi. Enthiran. Kanchana-2. Singam. Annamalai. In chronological order, Sakalakala Vallavan makes references to these films by borrowing either punch lines, background music, or songs from them. Director Suraj more or less rewrites the popular adage ‘If you can’t find a way, make one’ to ‘If you can’t find a way, make references to someone else’s way’. But while somebody like Venkat Prabhu has made a career by milking such references for laughs, Suraj’s ideas fail to evoke even a polite smile. He gives a robot makeover to ‘Mottai’ Rajendran, but even that isn’t funny. For a film that tries to be a comedy, Sakalakala Vallavan is quite sombre.

There are pitiable attempts at humour by the use of rhyming dialogues. What is particularly funny about rhyming the word ‘ kaththi ’ with ‘ bakthi ’, even ignoring that they don’t even really rhyme? In one scene when Sakthi’s (Jayam Ravi) friend, Chinnabuthi (Soori), wets himself in fear, Sakthi asks, “ Ennada adhu elaneer ?” And you’re thrown off, for, who looks at a wet pant, and narrows the cause to coconut water? You realise shortly that it was used, so Chinnabuthi can reply “ Elaneer illa da. Siruneer .” As Chandler Bing would probably have said, “Email me at hahanotsomuch.com.”

This is the type of film in which you could guess that a marriage would be stopped at the last possible minute and you’d be right. It’s also the type in which an educated, urban bride meekly lets herself be married off to the first guy to step up when her wedding is stopped. Sakalakala Vallavan is not only dated, but dangerous too. Among various gems that come out of Sakthi’s mouth is the advice that some women can be controlled only with some regular beating. It is passed off as a joke, but is it technically a joke if nobody laughs? Sakthi, who hails from a village, also believes that the problem with women in cities is that they get a divorce all too easily, without thinking about their respective families. Suddenly, an earlier scene that shows Divya (Trisha) throwing a glass bowl at his head begins to seem justified.

Sakalakala Vallavan , a bit like its 1982 predecessor starring Kamal Haasan, is about a gold-hearted villager and his taming of an urban woman. It is all so old-fashioned. Take the initial romantic scenes of Sakthi and Selvi (a partly clothed Anjali). Almost all of them have Sakthi accidentally falling down, his lips unerringly always landing on Selvi’s — bringing to mind the same horrible idea employed in Arunachalam . Later, when Selvi hugs him by mistake, Chinnabuthi demands to know why Sakthi didn’t push her away. His reply is gold: “ Ava gummunu irundhaa. Naan gammunu irundhen .” All I could think at the end was, “If I had stayed home, naan jammunu irundhuruppen .” Sorry, but the film does that to you.