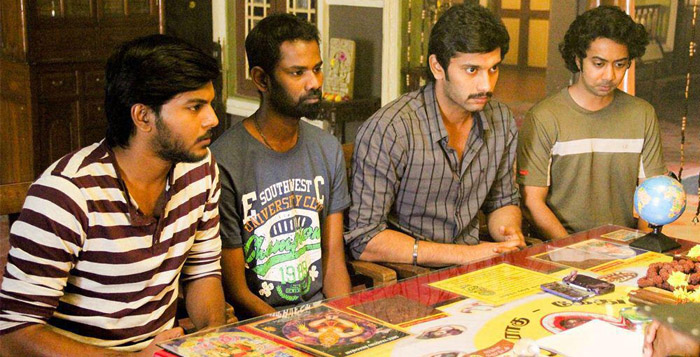 It was always going to happen. With all the horror films being made recently in Tamil cinema — and so many of them doing well — De Monte Colony in Alwarpet, thanks to its creepy history, was always going to serve as fodder for a horror flick. Despite the ‘any resemblance to reality is coincidental’ disclaimer (probably due to the inevitable flashback savagery), the film is a rather faithful retelling of the life of the Portuguese businessman named de Monte’s story, whose wife became mentally ill, and whose son died on his way to Chennai.

Before you’re shown this flashback though, you’re familiarised with the four protagonists, including Srinivasan (Arulnithi). He has a bizarre scene that shows him with a married woman who pays him money to have him call her ‘ Jillu ’. Srinivasan explains to his friends that it’s much like how Suriya’s character calls Jyotika’s in Sillunu Oru Kadhal . I couldn’t help but wonder if the director wanted to show Srinivasan as a male escort but perhaps chickened out, due to commercial considerations. Even if he did, it doesn’t add much to the overall story. Oh, and Suriya isn’t the only actor referenced during the opening half hour. At various points, you’re shown scenes of Rajinikanth, Vijay and Ajith to elicit cheap applause. Much to my annoyance, I noticed in the theatre that the technique worked just fine. For a film whose running time is barely two hours, it wastes a surprising amount of time before getting a move on. You even have to sit through a fast-paced opening number that has Arulnithi dancing rather uncomfortably.

It gets better when you learn of de Monte’s traumatic history. This is the film’s best stretch, and it includes a small scene with an astrologer (M. S. Bhaskar) that’s riotous, largely due to the dialogue delivery of the veteran actor. You sense much promise at this point, but… It was disappointing to note that the ghost may as well have been anybody. De Monte’s mention ends up seeming rather perfunctory, as his flashback — the murders, the rape, the mental illness — has no real bearing on what transpires later in the film. The friends get stuck in a room, from which there’s no escaping. I got reminded of 1408 . And then, a TV comes into play. And then, a twist that was reminiscent of Saw . And then, a Final Destination -like event. In between, there’s an ouija board used somewhere. Much loud music plays as if to remind you that it’s all very scary. And then, there’s a Sixth Sense -like scene. It’s like a collage of teensy homages to many Hollywood horror films.

For all my misgivings though, you could make a case for Demonte Colony being a brave debut for Ajay Gnanamuthu. It would have been all too easy for him to reduce the whole horror premise to laughs as many other Tamil films have successfully done. He goes for the jugular. He also admirably stays away from priests and exorcisms that have been, literally and metaphorically, done to death. He wants to shake you up and leave you walking out nervously, petrified of the dark and the dead. But he needed something more: new ideas to show the horrors unleashed by the evil spirit. The ones he uses aren’t enough.