Suffers from illusions of being grand 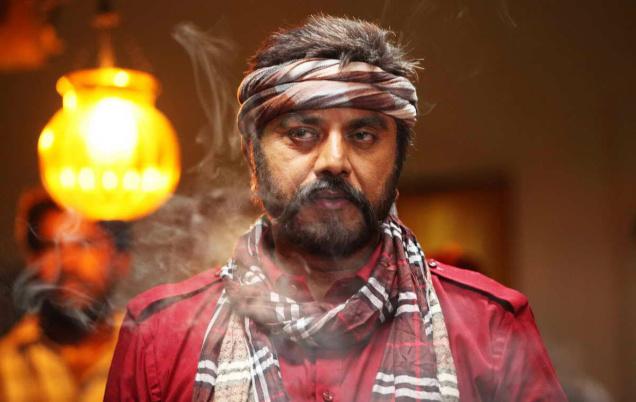 The talking point of Sandamarutham before its release was that Sarathkumar plays the villain (apart from being the hero, of course). So, naturally, you expect something explosive, something novel from the characterisation. Why else was the actor returning to play the villain after decades? This same thought seems to have been in director A. Venkatesh’s mind as well, as he has tried hard to make the villain, Sarveswaran, different. But it’s different-bad, not different-good. This lollypop-sucking villain is all over the place. He tries to be a funny psycho sometimes, a menacing villain sometimes, and just a man with childhood issues at other times — all of them unconvincing in various degrees. In one scene, he asks everybody in his gang to wear a watch, and one of his bewildered henchmen tells another “ apdina yaarukko time sari illanu artham ” (looks like somebody is in bad times).

In the middle of a menacing trash-talking session with the hero, the villain suddenly quips, “ Venaam, vibareedhadhukku visa edukaadha ” (don’t take a visa to the land of danger). With dialogues like these, how are you supposed to take him seriously? Even when you are allowed a glimpse into his traumatised past, you are left fighting an urge to laugh. An angry school principal barely puts a finger on his mother, and it’s enough for her to plummet off the balcony to her death. It’s so unreal even Cristiano Ronaldo would be ashamed of the dive.

Sarathkumar as the protagonist Surya is just fine though and, impressively, you don’t mind at all that an actor his age is shown romancing a character played by a Meera Nandan more than thirty years younger.

As if aware that individual scenes are not meaty enough, the script rushes from scene to scene. One moment, you have a comedy scene with the omnipresent Thambi Ramaiah. Next, you have a villain scene, a family scene (remember films such as Suryavamsam and Vaanathaippola ?), a love scene that leads to a duet, and all often in that order. This formulaic structure wouldn’t have been so bad if even a few of these scenes were impressive in their own right, but they aren’t. You simply get the vague feeling of having watched a similar film in the 90s.

Again, as if aware of it, the film tries several techniques to be innovative and stay relevant to the times. There are groups of white men who want to destroy India. There’s a new explosive called Ophalasica (no way of knowing if I’m spelling it right) that according to the makers ‘is made of potash sulphur nanoparticles and can be kept under control only inside a vessel made of copper’. In fact, when a policeman is made to believe that he is deluded (a la Isai ), the villain explains that he may be suffering from ‘illusion phobia’, as if it were some legitimate medical term. It’s just like the film: it thinks of itself as novel and impressive, but it isn’t.