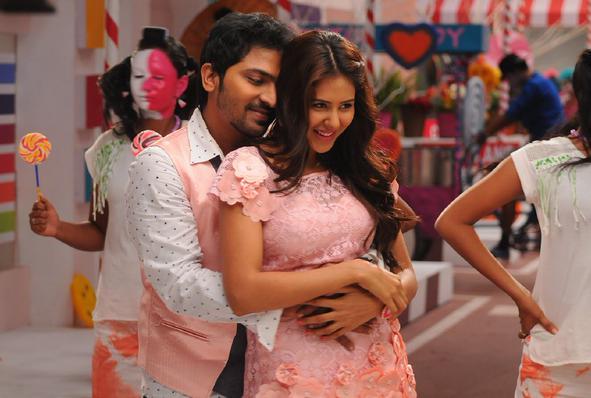 The premise of Kappal — three friends willing to go to any lengths to stop the fourth from breaking their childhood promise of celibacy — isn’t altogether rooted in reality. But to be annoyed by it is to miss the point. There’s no message here, just like how the main characters are friends for no particular reason. As the film asks before displaying its title card: Who needs a reason to be friends? Director Karthik G. Krish, however, understands that while friendship may not need reasons, humour definitely does. And there’s plenty of that in the film.

The joke meter starts counting very early in the film when the main characters are shown as poor students, who try to con their teacher with the oldest trap in the classroom — the grand old ‘total mistake’ trick that involves adding extra numbers with a red pen. Even as you laugh at the way the scene plays out, you wonder why no Tamil film has really drawn extensively from the reservoir that is classroom humour. The protagonist Vasu (Vaibhav), along with his friends, played by actors such as Karunakaran and Arjunan, then move on to college, and the joke meter continues to tick. In this phase, Vasu is your typical college casanova — at any given time, a college girl isn’t more than five inches away from him — and his friends aren’t happy with the way he’s shaping. It is during this time that you wonder if the idea for the film was inspired by an old Vivek joke: “ figure-a paatha udane, friendship-a cut pannitingale ”. Vasu finally wriggles himself out of the vice-like emotional grip of his friends by escaping to Chennai, which according to Kappal , is a bachelor’s dreamland with women waiting to be ‘corrected’.

The jokes continue to remain funny with VTV Ganesh entering the scene. Sonam Bajwa, who’s clearly had a tough time trying to mouth her lines, is almost always in a tight spaghetti top and shiny lipstick, thereby fulfilling her part as the pretty girl who makes Tamil heroine-like choices. You also wonder if Kappal could have resisted from having Ganesh say lines like, “ City-na pick up pannidalaam ,” and explaining to Vasu that “rich girls are easy” and that “most girls who talk English cannot talk good grammar”. But then, I suppose in a film that only tries to be funny, one mustn’t take these dialogues too seriously. It would have been easier not to take them seriously had they not existed in the first place.

Kappal , however, fulfils its only purpose — to be funny. One of its gems is when Vasu is surrounded by rowdies and he requests them to desist from violence and instead engage in an exchange of abuses. As the goons and Vasu trade verbal blows, you hear nothing, of course — who dares take the censors on when there’s a 30 per cent rebate on offer for U certified films? — but as you can glean from the laughter in the theatre, there’s nothing to stop the audience from imagining the words. Green Tamil letters sprinkle forth from Vasu’s mouth as he hurls what clearly are the vilest abuses ever (the goons start bleeding from their ears and reel in the impact, while some run away in terror), and just as you wonder why the director has chosen that colour, you realise it’s because Vasu ‘ pachchayaa pesaraar ’. From this graphics sequence, you can easily guess that director Karthik is Shankar’s assistant. If you cannot figure it out from this scene, the whole “Kadhal casatta” song and its lavish set leave no doubts.

The film’s censor certificate shown at the beginning tells you that Kappal is more than 150 minutes long. Even then, you wonder if a funny film can sustain itself that long, and while it does come pretty close, you can see that it could have been tighter. For example, the rehash of Karagattakaran ’s ‘Ooru vittu ooru vandhu’, which starts off being hilarious, tapers off into boredom as you realise dimly that the full song has been used. Some serious scenes towards the end also seem out of place in a movie that happily treats attempted suicide and injuries as jokes. On the whole though, here’s actor Vaibhav’s big breakthrough as a solo hero. This Kappal sails strong for the most part.